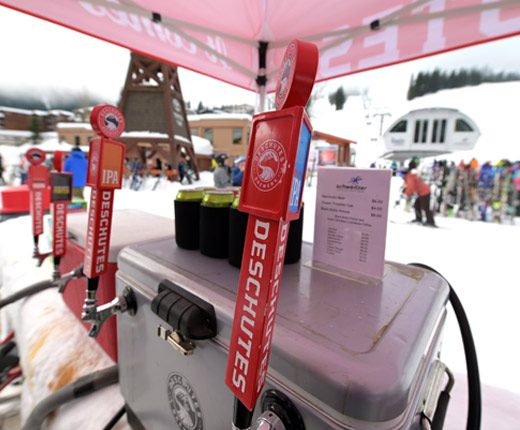 The Deschutes crew is coming back to Schweitzer! We’ll have a Snow Bar in the village near the clock tower kicking things off on Friday evening and quenching your thirst with Deschutes beers all weekend.

Come on out on Saturday to check out the Torchlight Parade, Fireworks, drink a great Deschutes brew and enjoy the show! Taps Lounge will be celebrating with 5 bands for the weekend and specials on Deschutes beers, plus you can win great prizes from the Deschutes team. While you’re at it, make sure to try a Cold Brew Black Butte cocktail featuring cold-brewed coffee from Evans Brothers mixed with Black Butte Porter and topped with whipped cream. Delicious!

Keep your eyes peeled this weekend while you ride in search for the coveted Golden Keg. Stop by the Snowbar once you have found it & taken a picture with the Golden Keg. Show off the photo to the Deschutes team at at the Snow Bar to receive your prize!