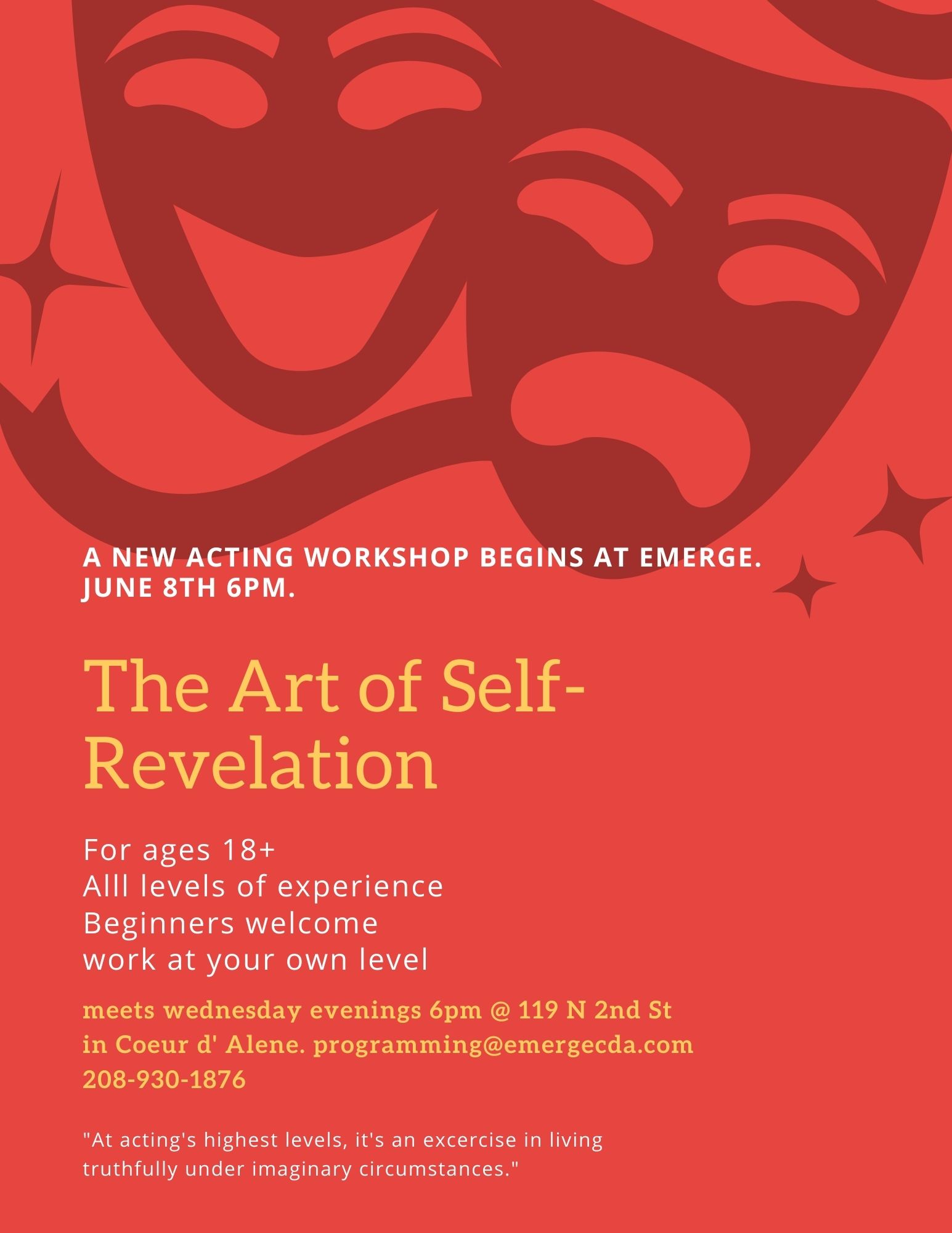 For working professionals as well as those who seek initial training.
Everyone works at their own level and pace within the group.
It begins with the uniqueness of the individual.

This class will be 4 weeks- Wednesday Nights 6pm-10pm

At acting’s highest levels, it generally has little to do with pretending contrary to
what most people might think. It’s more useful and certainly more accurate to say
that good actors pretend to pretend. The 21st century movie actor is in the business
of living truthfully under imaginary circumstances. Like musicians, dancers and
other performers, they train throughout their professional lives, a foundational part
of which is living fully in the moment, in midstream with the power of their energy.
In work situations, they rely on an intuitive sense of their potential acquired
through experience.

Enter: the acting workshop, where they can go places they cannot in performance.
It’s a place with built in safeguards, where the actor is insulated from real life
repercussions—where she can be herself without having to worry that someone
isn’t going to let her. This clears the way for permission she gives herself.
Permission to allow and respect her feelings without apology or self-censoring.
Permission to venture outside her comfort zones and find out what’s there.
Permission to be spontaneous and free, which is an absolute prerequisite for
genuine interpersonal communication.
Through the work, the actor in training soon discovers that the deepest levels of
interpersonal communication are emotional, not verbal, and are more specific than
words will allow.

Our emotions are an integral part of our physiology. They are the most spontaneous
part of us, the most fundamental expression of our awareness as we relate to the
world, and the most accurate reflection of that relationship. You could say, “Being in
touch with our emotions is being in touch.” And yet for most of us being with our
emotions is something we have forgotten how to do. Our parents, teachers, and
society at large have taught us that open displays of a growing list of emotions, such
as feeling hurt or even being loving, may be appropriate for infants and toddlers, but
not for adults. This conditioning is the primary cause of our becoming disconnected
from our feelings. As a result, we’ve learned to mask them as a course of habit. In
the process we’ve become desensitized and lost sight of them altogether. When this
happens, we lose the ability to resolve and clear them along with valuable insight
into ourselves. When we become adversarial toward our emotions, we in effect
reject our body’s main guidance system. A system for helping us move away from
pain and suffering, and toward our most basic state: ease and pleasure.

The lessons learned in David’s Workshop cannot be achieved through counseling or
reading a book, rather, the actor in training must feel his way through. Imagine
attempting to learn to play the violin without the benefit of holding one in your
hands and experimenting with it. In the workshop, you are the violin: your body,
voice and emotional life.

Through the work, misconceptions and inhibitions are shed and the actor emerges a
more honest human being, capable of subtler levels of communication and new
levels of theatrical power.

The workshop is for everyone. The benefit of doing the work on a weekly basis
transcends artistic achievement. It reaches into our day-to-day lives in profound
and unexpected ways, resulting in real and lasting changes in our relationships and
our capacity for creativity, as well as ease and pleasure.

David’s Beverly Hills workshop was known as a refuge where industry leading
performers regularly convened to flex their creative muscle under the watchful eye
of David and Oscar winning director, Sydney Pollack, who has the unprecedented
distinction of having directed 12 different actors to Oscar winning performances.

David is and accomplished actor, director, and Emmy nominated producer who has
risen to prominence in the realm of acting coach (Back to the Future, Platoon, The
Firm, 48 Hrs., Star Trek: The Next Generation, Charles In Charge…) His onset
omnipresence prompted LA Cover-to-Cover Magazine to dub him “The Hollywood
Cure for Performance Meltdown” (“Coaching the Stars” circa 1985). His acting
workshop was a notable fixture in Beverly Hills spanning a quarter century. He has
recently settled in the area and is currently on sabbatical.

This is a free event, although donations are welcome. This is a ticketed event so please sign up to reserve your spot!